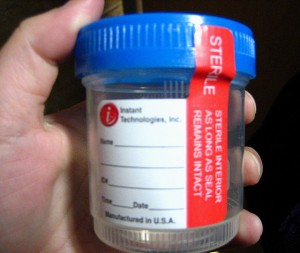 A growing concern over the use of illicit drugs in the workplace has led to an interest in urinalysis as a way to detect and deter drug use.

Drug testing by urinalysis has been  implemented for prospective and current employees in industry; for personnel of the armed forces; for parolees and bail seekers in civilian court systems, as well as the participants in family court matters; and for workers in the transportation industry. Two factors have led to the widespread use of urinalysis for drugs: technical developments in testing methods and the growing demand for drug testing. Society is becoming increasingly aware of the impact of drug use on public safety and of the financial impact on industry of lost time and productivity.

The annual loss of productivity of employees has been estimated at $100 billion for alcohol and drug abuse, a third of which is due to drug abuse alone. Drug and alcohol abuse in the workplace is amenable to carefully planned prevention programs, however, and urine drug detection provides a powerful tool for use in such programs. Preemployment urine screening is now common among “Fortune 500” companies and in several Federal agencies.

At the Center, we have brought the cost and convenience of physician-supervised drug testing to levels where smaller companies and individuals can afford these drug tests.

We offer urine drug testing for the following drugs:

Samples are collected at the time of visit, and first subjected to tests designed to uncover adulterants or other methods of falsifying test results. If any tests are positive, the client (or court or client’s attorney) has the option of requesting a second verification by laboratory test for an additional fee. However, if you do go under this test and consume for medical purposes, like medical marijuana, then make sure you take your medical marijuana license.

All results from the drug test are provided to the client and/or his authorized representatives within 30 minutes of test administration.

We offer same-day appointments and can accept walk-ins during normal office hours. The Center is open evenings several nights during the week, and Saturday drug testing appointments may be arranged through prior appointment.

Dr. Avery Jenkins is a chiropractic primary care physician in Litchfield, CT. He is board certified in clinical nutrition and acupuncture, and is a frequent speaker and lecturer. He provides drug testing services for employers, courts, and attorneys state-wide.